DNM Nutra Amino Burn is a new revolutionary fat burner with an energizing and regenerating effect. The supplement supports concentration and focus during the day. Advanced burner rich in ingredients such as: advanced forms of carnitine, yohimbine, bitter orange extract, caffeine.

Thanks to the high dose of stimulating yohimbine, it allows you to burn even stubborn fat located on the thighs, abdomen and buttocks. The fat burning supplement Amino Burn contains doses of active ingredients that increase metabolism, increase the level of energy and focus, and above all, intensify the thermogenesis process by burning adipose tissue. The addition of the most important amino acids protects the muscles against catabolism.

L-Carnitine Tartrate - a combination of L-carnitine and L-tartrate into one molecule, which is designed to support the body's hormonal response by limiting damage to anabolic receptors. Research has shown that LCLT helps to increase testosterone uptake and use it to build muscle proteins.

Taurine - this amino acid increases the endurance of the body and counteracts the symptoms of fatigue, and also improves our concentration. Taurine enables faster and more effective post-workout regeneration. Another important feature of this amino acid is that it reduces the negative effects of stress while we are on reduction and following a low-carbohydrate diet. Taurine is also anti-catabolic and supports the transport of creatine.

Leucine - affects the synthesis of skeletal muscles in several ways: it increases the secretion of insulin, a powerful anabolic present in our body, affects the activity of the S6 protein kinase, accelerates the phosphorylation of eIf4E binding protein and affects the degree of connection between proteins (eIF) 4E and eIF4G. All this, despite the complicated sound and nomenclature, boils down to a very simple theorem - Leucine increases the degree and speed of using proteins to build muscles.

Isoleucine - the supply of large amounts of Leucine reduces the level of the other two amino acids: Isoleucine and Valine, which is why it is so important to use all three compounds together. In addition, Isoleucine is classified as glucogenic amino acids, i.e. those that the body can easily and quickly transform into energy necessary for its functioning. This means that we will not only be able to train longer and more intensively, but also recover faster.

Valine - its presence in this combination, owes not only to the aforementioned need to administer all three BCAA amino acids together, but also to reducing central nervous system fatigue. In addition, as in the case of the other two amino acids, it is easily converted into energy used by working muscles and thus allows you to save the glycogen stores accumulated in the liver.

KSM-66 Ashwagandha - high-quality Ashwagandha root extract obtained in a process consistent with the principles of 'Green chemistry'. As an adaptogen, it has a positive effect on the body's energy management. It contributes to the protection of tissues against damage - acts as an antioxidant and supports the building of muscle tissue. It helps in maintaining vitality, well-being and emotional balance as well as in states of reduced concentration, exhaustion, fatigue and nervous tension. In addition, it supports the processes of learning, remembering and maintaining mental fitness in good condition.

Grape Seed Extract - rich in bioactive Polyphenols, among which we can find: Resveratrol, a very strong antioxidant, effectively combating free radicals. The active ingredients of this extract have the ability to cross the blood-brain barrier, effectively protecting the entire nervous system against damage. They also prevent heart disease by strengthening the walls of blood vessels and preventing calcification of the veins. Moreover, proanthocyanidins show strong anti-cancer properties.

Caffeine Anhydrous - supports the development of adrenaline and the penetration of fatty acids in the blood into the body during exercise using the available fatty acid instead of glycogen, as well as stimulating the central nervous system.

Bitter Orange - bitter orange is not an edible fruit, but it is an excellent source of vitamin C, the amount of which in the extract can reach even 42%. Compared to regular oranges, bitter oranges are much richer not only in vitamin C, but also in antioxidants, e.g. bioflavonoids such as hesperidin. In addition to the high content of perfectly digestible vitamin C, the bitter orange is famous primarily for the content of synephrine in the plant, which is a natural substitute for ephedrine. Synephrine has a similar structure to ephedrine. It is obtained in a natural way, from unripe citrus fruits, eg Citrus uranium L., Citrus aurantium L. This substance is a natural substitute for ephedrine. Increasingly, it is added to drugs and dietary supplements intended for athletes and overweight people.

Grains of Paradise - the extract acts agonistically on TRPV1 receptors and increases the production of adrenaline and norepinephrine, promotes lipolysis, thanks to which it releases energy substrates necessary to maintain the continuity of the muscles involved in physical effort. By intensifying the degradation of previously accumulated adipose tissue, increasing the efficiency of thermogenesis taking place in brown adipose tissue. It promotes the appropriate hormonal environment by increasing testosterone synthesis and, acting anti-estrogenic, supports the shaping of the appropriate body composition. By leading to strong excitation of TRPV1 and TRPA1 receptors, it causes limitation of their activity, which reduces the amount of pain experienced.

Yohimbe Bark Extract - a substance that is helpful in the fight against the so-called resistant adipose tissue, located mainly in the thorax and lower waist areas in men and hips, buttocks and thighs in women. Yohimbine works by blocking α2 receptors, which clearly facilitates slimming and is helpful in sculpting body parts resistant to slimming. It is worth remembering that the effect of yohimbine is effectively eliminated by insulin. So taking this compound around carbohydrate meals is pointless. Yohimbine is especially effective when used on an empty stomach, before exercise.

Bioperine - black pepper extract - the key ingredient is piperine - it makes us sneeze, but also affects the fact that we lose weight. Scientists have carried out research which clearly shows that piperine interferes with the action of genes responsible for the formation of new fat cells. 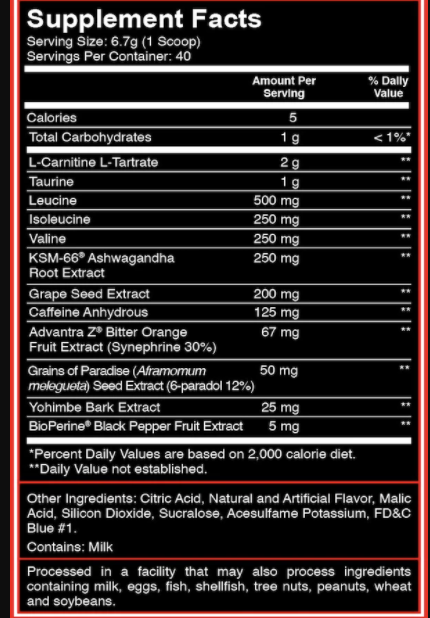